Posted in: UpcomingCons
Jun 13, 11 at 7:03pm | Katherine
Contagion: Outbreak! is a new pop culture convention that took place in Omaha from June 10 - 12.  I was only able to attend on Saturday this year, but I definitely plan to go back for the entire weekend next year.

"The Steampunk Society of Nebraska's booth

Staff members lined up some big names, including Jewel Staite, Mark Ryan, and Richard LeParmentier. For a convention that only cost $25.00 for the weekend ($32.20 after Ticketmaster fees), there was quite a bit to see and do.

Contagion: Outbreak! was held at the beautiful Qwest Center in downtown Omaha.  It did not fill the entire convention center (in fact, there was a gem and jewelry show just next door), but convention staff made excellent use of the space they had.  The vendor area was large and filled with geeky booths of all kinds.  There were also several vehicles and mock-ups, including the Decipticon Motormaster and a full-scale replica of the Star Trek transporter room.  A big advantage to having such a large space is that it never felt crowded.  There were no lines for tickets, restrooms, vendor tables, or autographs.  There were also plenty of seats in all of the panels I attended.  Reasonably priced food was available in the dealer room--I had a hot dog for lunch that cost $3.00.  Of course, food choices inside the convention center were limited and there were not a lot of healthy options.  There were also very few food options within walking distance.  The other down side to using this venue is that parking was very expensive at $8.00 per day.

I attended three of the scheduled panels and they were all excellent.  The first was "Future of Urban Fantasy" with Chloe Neill.  While I hadn't read her books, many others in the audience had, and were clearly big fans.  Neill was engaging, funny, and personable.  She talked about the current state of the genre and its possible future, as well as taking questions from the audience. 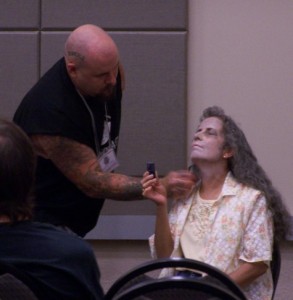 I also attended "Zombie Makeup 101."  There seemed to be a mix-up with this event--it started about fifteen minutes late, and convention staff told the audience that there had been some confusion with the original presenter, so two other make-up artists were brought in to pinch hit and give a live zombie make-up demonstration.  These two guys were extremely knowledgeable and did a great job. The final make-up, applied to a volunteer audience member, was amazing.

The big draw for the day was the Q&A with Jewel Staite.  She and her husband, Matt Anderson, entertained a group of about 200 con-goers with stories from Firefly and Stargate: Atlantis, as well as other conventions they've attended.  There was some confusion about the seating for this panel.  The convention offered VIP badges for $100.00, which included "VIP Q&A seating."  However, no VIP seating was actually designated.  A few people in the room said that con staff told them the first three rows were for VIP badge-holders, but no formal announcement was made, and there were plenty of non-VIPs in the front row.  This issue could have easily been fixed with a few signs or a designated staff person's guidance.

While I didn't experience them, there were a lot of other fun events on the schedule.  These included a Settlers of Catan tournament, steampunk croquet, bellydancing, and an artist jam.  Convention organizers did a good job of providing a wide variety of events to appeal to geeks of all kinds.

Any new convention is going to have some growing pains, and Convention: Outbreak! got almost everything right.  While there are definitely some improvements that could be made for next year, this con is off to a great start, and could become a big star among Midwest conventions.