Our adventure began traveling south on the con highway, that’s highway 75 south to most folks. After a long arduous drive, I knew we were there when I saw The Varsity. A great old 50s style historical burger drive in, that I will have to make time to visit before leaving Atlanta. Then exit 249, our destination only one exit away. Upon exiting onto Peach Tree Center Avenue making our way to the Marriott Marquis it looks like a colony of ants scurrying everywhere. Every street and every corner crowded with a colorful collage of characters from anime, super heroes, steam punk, comic book, manga and science fiction characters. What a sight! We saw some good rates on parking at $10.00 per day about 2 blocks from the Sheraton. The high end parking was Valet parking at the Marriot at $35.00 per day. 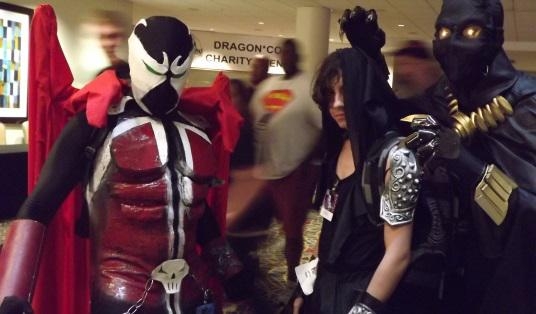 Dragon Con is one of the largest multi genre popular culture conventions of its kind in the south east focusing on science fiction/fantasy, gaming, comics, literature, art, anime, manga music and film . It is spread out between the Marriott Marquis, Hyatt Regency Atlanta, Hilton Atlanta, Sheraton Atlanta, Westin Peachtree Plaza and AmericasMart. This is Dragon Con’s 28th year and offers loads of fan-based tracks, a large downtown parade, an art show, many different comic and pop art displays, several superb costume /cosplay contests, nightly concerts and parties, bands and djs, 4,000 hours of panels, workshops, over a hundred exhibitors/dealers, gaming and a walk of fame larger than any that I have ever seen. 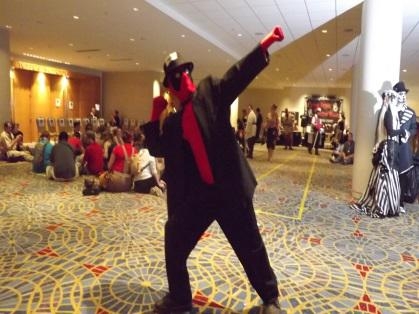 Our first stop to our weekend adventure is the Sheraton Atlanta to check in. Our rooms were very accommodating. We had a very pleasing experience with the Sheraton staff while staying there. The Sheraton was absolutely great! A courteous staff taking care of the new arrivals, passing out some really good lemonade on a very hot and humid day and in a very upbeat mood. I highly recommend any of the host hotels. They are all excellent hotels! However, I do recommend setting your reservations now for 2015 because if you wait long they will be sold out. They all start setting reservations for 2015 while the 2014 convention is going on. We arrived on Thursday departed Monday so we could get the whole con experience. After dumping our mountain of suitcases in our room, we go down to the first floor to check in a con central, where we are greeted by miles of roped off aisles and staff smiles to get our passes issued. We must have arrived at just the right time as we only had about 50 people in line ahead of us. The registration process was very proficient and expedient. We were in and out in less than 45 minutes. I would like to say that the Dragon Con staff was very pleasant and friendly and made you feel welcome. Just some FYI, Dragon Con has over 1,800 volunteers that help during the convention, whose help is greatly appreciated. 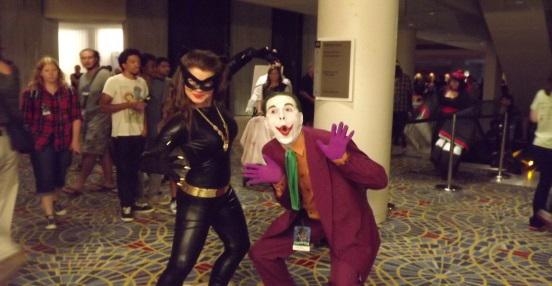 Then badges in hand, it was time to turn loose my photographer, Press Pool. Now that we had arrived safely and got our badges we were off to Dragon Con heaven! The only problem was to decide what to see and do, as there was such a myriad of activities available. Another Dragon Con FYI is; you can not do it in a day! Dragon Con is a lot like Disney World. You can not see everything nor do everything in one day. This event is colossal! So, bring good walking shoes as you will be walking a lot. This brings up my only negative about the con. It is very spread out between the 6 event locations, so it is very easy to get in several miles of walking in between the locations. I took my pedometer and walked a total of 7 miles before I was through for the weekend. Although, the positive to this is you have a multitude of CosPlayers to look at as you move from one location to another. This was well worth the walk! 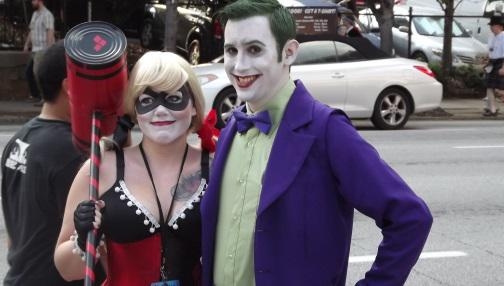 We began Thursday with a quick tour of all of the locations and saying hey to Dan Carroll Director of Media Relations and his staff. We really appreciate Dan and his staff. They all make the Press registration very easy with their press kits and very efficient press registration. After a quick lunch at the food court, we attended several panels before ending our day with the Dragon Con opening ceremonies. All were very good panels. Then Saturday really launched our Dragon Con assault. For the next two days we thoroughly enjoyed ourselves constantly moving from one panel, event or show to another. Since I am an old sci fi fan I made sure I was able to see all of the sci-fi venues that I could from Sir Patrick Stewart. Also I saw some great comedy/Music concerts that were extremely entertaining! The highlight of our Saturday was the CosPlay costume contests. I really enjoyed the Dead Poole meet up. There were probably 75 Dead Poole’s. These guys are absolutely having fun and entertaining the fans. The cosplay groups attending bring together some very talented costume makers and fabricators. Saturday we also sit in on some very good panels on steam punk, How to Run a Convention, horror, anime and manga, robotics, online gaming, Tolkien’s Middle Earth, Star Trek , Star Wars, comics /pop art and several live performances. Some great horror panels and a display were hosted by NetherWorld. Another highlight was the tour of The Walk of Fame. Where I was able to speak to such actors as; my good acquaintance Gil Gerard, Roy Wooley, Caitlin Glass, Lou Ferigno and some of the Hobbit Trilogy actors. Just to name a few. There were actually over 120 guests in total on The Walk of Fame. Each guest a true professional in their perspective fields. Also, there was over 124 dealer tables, 127 Exhibitor Booths, 88 artists on Artists Alley and 127 artists participating in the Art Show. 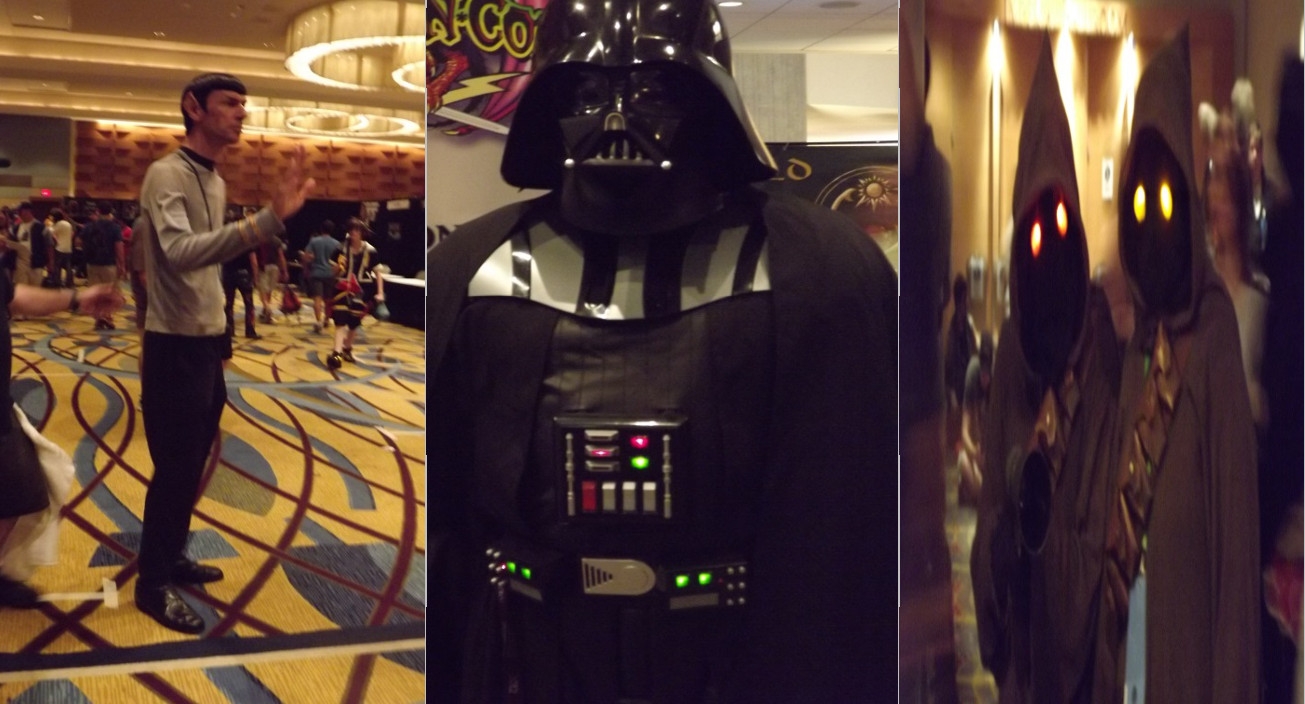 In summation, Dragon Con is a top multi genre con. It draws a multitude extremely good cos players, guest actors, writers and professionals that are tops in their fields. They really exceed my expectations each year we return. Also, they have a very good redesigned dragon mascot this year. Don’t forget to use the Dragon Con mobile as it really helps with your planning your event calender. The only thing negative that I could say about Dragon Con is that it’s so large. However, isn’t that called getting your moneys’ worth? But when the weekend was done, Dragon Con was an exceptional event suitable for the whole family. I met con attendees from a low age of three years old to the nice “young” age of 67. I give Dragon Con my top ratings of 9.8. In conclusion, I did get back to The Varsity for some great chocolate shakes and chili dogs and it was a great nostalgic trip to my childhood. I look forward to attending next year!