UpcomingCons
Sep 21, 12 at 6:23pm | Ryan Kopf
Ramencon, a small convention hosted in the small Chicago suburb of Merrillville, Indiana, raised over $1900 for charity on Friday. All money raised the charity auction would go to St. Jude's, "for the children," according to the chairman.

"Most of the items were donations from other congoers and myself," said Ramencon chairman Chris. 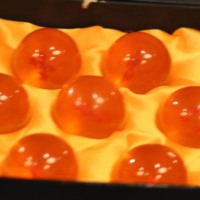 "Dan McLain donated the majority of the items such as all the swords, except for the sword donated by Samurai Dan. He [McLain] donated the one piece mangas, and the DBZ Dragon Balls. I've donated about half a dozen, and auctioning the special guests is something I've always done. We did it last year, this year, and we'll do it again."

It's for the children.

The $1,900+ raised will be donated to St. Jude Children's Research Hospital. Many of the dozen items donated were sold for over $50.

Derpy MLP Figure
The auction looked like it may start slowly as there were only about 150 in the audience, until the auction began. First item auctioned was a limited-edition My Little Pony figure from Comic Con. Bidding began with $50 from a Dave Strider (Homestuck) cosplayer and jumped instantly to $100, with the winning bid going to Tasty Peach Studios.

Guest Auctions
After the pony figure, Ramencon chairman Chris auctioned off the guests. Technically auctioning opportunities to have breakfast with each of the convention's guests, catered by the convention in the hotel's cafe.

"They get an hour with the guests, Saturday afternoon," Chris told us.

First sold was England native and electro-rock artist Kieran Strange. Bidding started and $50 and jumped to end at $100. Kieran then auctioned off an original drawing of a hedgehog playing guitar, which sold for $55 to the Dave Strider from earlier.

"Monica is a sweetheart," said Juan. "I was determined. I had a limit, but I hadn't quite reached it yet."

Todd Haberkorn then went to the first bid at $100 to Johnathan. The audience waited with baited breath as a possible contendor considered bidding, but the first bidder's opening bid was just too high to compete with.

"I wanted to get an autograph early," said Johnathan.

FanService Renji sold at the end of the auction for $20.

Memorabilia and Swag
A box of glass dragon balls opened bidding on anime memorabilia, with a box of glass Dragon Balls from Dragon Ball Z selling for $150. 29 volumes of One Piece Manga, various issues, went for $70. 12 issues of Naruto manga went for $35. An autographed headshot of voice actor Vic Mignogna sold for $15. An old, framed ADV Films flyer donated by and autographed by Tiffany Grant in addition to a few others sold for $15. A framed, autographed Hello Kitty flyer sold for $40. I tried to bid for it, but stopped at $35.

A box filled with old strategy guides liberated from the Gamestop discards sold for $25. A chobits manga collection including volume 1 and volume 8 sold for $50. An audience member shouted, "they're not real," and the chair replied with "They are, they live in my heart."

A Sephiroth action figure sold with much enthusiasm from the audience for $75. Zolo's sword, full tang, "ready to cut people," sold for $85. A left hand one piece sword went for $80. Rurouni Kenshin's reverse-blade sword sold for $50. As the highest selling item, a wooden sword donated by Samurai Dan and signed by all the guests went up in a fierce back and forth battle for $300. A plastic replica master sword sold for $85 to one of the convention's special guests. A wodden Final Fantasy Buster Sword sold for $70. The final item, an ultimate keyblade went for $90 to Matt from Death Note.
Please login to post.