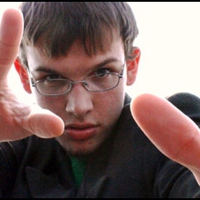 Submerged in the Minneapolis, Minnesota music scene (yes, it exists!), StarF is as much of an artist as he is a fan of Hip Hop. After writing lyrics for years and realizing he needed to find a way to transmute his words into song, he began his journey into rapping around April of 2006. After years of hard work and improvement, he finally found his way to Scrub Club, which was not just another record label, but a collection of people who he could relate to and call his family. Raised by internet culture and obsessed with music, StarF blends a mixture of poetics and edgy humor into everything he produces. Every new project is approached as the beginning of something that will better himself rather than a means to an end, and as so, StarF is consistently progressing and leveling up within the Nerdcore community. While socially awkward to a noticeable degree, StarF still loves everyone in the community he meets. Despite any awkwardness, he will never hesitate to grab a mic and rock it for a crowd.