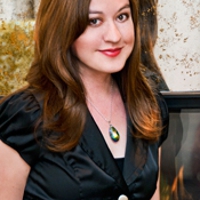 Out of the booth, Clarine spends her time producing DVDs for FUNimation, tending to her horde of rabbits and proudly spreading the gospel of sock knitting. She is also the inspiration behind the character Aubrey, a regular cast member on the popular web comic, Something Positive.