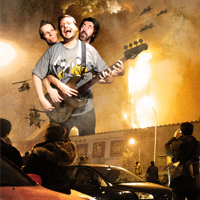 Possible Oscar Pictures
This entry or version has yet to be approved by our editors.

Possible Oscar is a Minneapolis, MN based comedy rock act that specializes in original and parody songs. Their musical topics range from video games to nerd love, with stops at comic books and notable Hollywood movie sound effects. Possible Oscar’s sound is two great tastes that taste great together; they usually play rock music, but sometimes a little hip hop is in order.

The Dr. Demento Show has played several Possible Oscar songs, including “Earn Hollywood Earn”, “Talk Nerdy to Me”, and “Get Our Geek On”, and a few of them have made Dr. Demento’s regular countdown. “Earn Hollywood Earn” was selected to appear on Dr. Demento’s Basement Tapes #15. In December of 2007, their song “That Calls for a Wilhelm Scream” landed at the No. 23 spot on Dr. Demento’s annual Funny 25 countdown. In 2007, Possible Oscar became a Core member of The Funny Music Project (The FuMP) which releases two songs every week for free under a Creative Commons license. Possible Oscar is currently writing and recording material for their third full-length album.