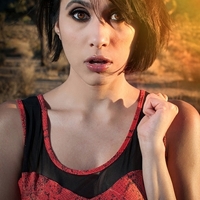 Starting out as an anime fan herself, today Cristina Vee is one of the most-recognized voice actresses in the dubbing community. Among her many roles, she is most well-known as Mio Akiyama in K-On!, Nanoha Takamachi from the Magical Girl Lyrical Nanoha series and more recently as Homura Akemi from Puella Magi Madoka Magica. In addition to her voicing anime characters, Cristina’s voice can also be heard in many video games, including Cerebella from Skullgirls (which she was also the voice director for), Noel Vermillion from the BlazBlue series and champion Riven the Exile in League of Legends. Ever a fan at heart, she still participates in various hobbies in her spare time, such as singing cover songs and posting them on her personal YouTube channel, ValliereVee, among other indie projects.

Cristina has worked with a ton of other voice actors, including doing projects like hosting a web show with Johnny Yong Bosch.