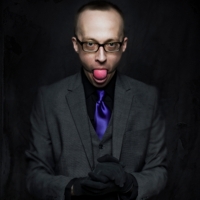 In the ten years since creating his act, NYC-based rapper and comedian Schaffer the Darklord (STD) has employed a cartoonishly commanding stage presence and brainy, rapid-fire rhymes to skewer such topics as hedonistic substance abuse, sexual compulsion, gender identity, urban anxiety and obsessive cat-enthusiasts. With five full-length albums under his belt and experience touring the nation with such acts as mc chris, MC Frontalot and MC Lars, STD’s music and live show are equal parts Bill Hicks, Beastie Boys, Prince, Ozzy Osbourne and Darth Vader. He’s made multiple appearances on the Science Channel television program “Oddities,” and when he’s not on the road, he serves as emcee for countless NYC burlesque shows and produces/co-hosts his podcast, “The Epic Piecast.” His latest record “Sick Passenger,” a concept album set during a mysterious therapy session, was released in October 2013 to glowing praise from his cult-like fan base and critics alike. Schaffer the Darklord continues to write, record and perform with great frequency and has no intention of giving up until his masochist rock-n-roll lifestyle destroys him. http://schafferthedarklord.com