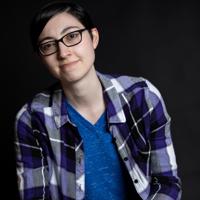 Jesse “Nowacking” Nowack is an actor and writer, just like everyone else in New York City. A founding member of Elite3, Jessi co-writes “Pokémon ’Bridged” and voices various characters in TeamFourStar projects, including Seras (”Hellsing Ultimate Abridged") and Red (“Fist Master”). When not busy doing that, Jessi is a video editor for TeamFourStar’s gaming channel and the YouTuber JacksFilms. Other notable roles include Vinyl Scratch in various brony animations/songs such as “Epic Wub Time”, “I Am Octavia”, and “All About That Bass Cannon”, as well as various anime roles. Hobbies include (terribly) playing video games on Twitch, but if you want to hear Jessi in an actual video game, you can check out “Potion Lore” and “2064: Read Only Memories”.