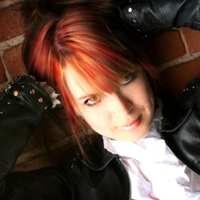 Ring the bell! Coming to the booth, from Wichita, Kansas, weighing in at (an undisclosed weight, probably less than your figma collection) pounds, It’s Caitlynn French! Caitlynn is new to the scene, having debuted in 2012 as Qumola from Book of Bantorra. She’s ran the ropes and trained hard to conquer roles such as Hana Isuzu (Girls Und Panzer), Matsurika Shinouji (Maria-Holic, Maria-Holic Alive), Mei Tachibana (Say “I love you”), and Miyu Edelfelt (Fate/kaleid liner Prisma Illya). She has recently come back from her most rewarding role yet, as Ai Astin (Sunday Without God), proving that she has the true makings of a champion voice actor. Caitlynn recuperates from her time in the booth by playing video games, and watching professional wrestling. She goes through grueling vocal conditioning playing tabletop roleplaying games, and is a frequent guest on the Shrinetime Podcast. Catch more of this rising star on facebook, and twitter, and watch as Caitlynn grabs the VO world by the ears and gives it something it won’t soon forget.