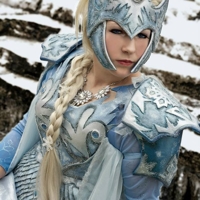 Cosplayer, graphic designer, costume designer, artist, aspiring actress and Japanese dancer; Mimiru has been in the hobby for a little over 15 years. Now, she wishes to further her skills and experience and join the industry, fabricating costumes and going further into acting. Now she is working with RetroHawk Productions in the filming for Antediluvian, a Steampunk Webseries as Commander Miranda Rose.

On top of acting and costuming, Mimiru has a deep love for Japanese culture and language, and conducted research in Japan, traveling to Nagasaki, Tokyo, Osaka, Kobe, Kyoto, Nara and Hiroshima. A couple of months later, she once again returned to Osaka to study at Kansai University in Suita. Mimiru also has a background in Nihon Buyou (traditional Japanese dance) and has learned in both, the United States and Japan.