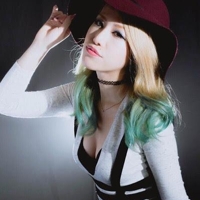 DJ Meirlin has been described in many ways, innovative, creative, and cutting edge are the 3 best ways of describing her music style. Focused in Electro, House, bass, and trap music, her energetic mixing styles and unique track selection flows together to create lively sets for any atmosphere. She is not detached to any genre, and she is always creating innovative sounds and looking for new ways to express her creative self. In Japanese, her native language, the word “music” is written in two simple kanji characters, sound and fun. “Music should be fun”, DJ Meirlin takes that to heart, making sure every little note in her set is enjoyable both for the crowd and herself. She believes if she is not having fun herself, the crowd will not be “turned up”. Through that mindset, she is excellent at energizing her listeners, and progressing them through her often genre-rich performances.

Born and raised in Japan, DJ Meirlin started her musical journey when she was introduced to the classical piano at the age of 3. Through the continuous 10+ years of involvement in the classical music, she gained knowledge and love for the music world. As she continues her passionate journey, she came across a different genre of music. She fell deeply in love with electronic music and it did not take time to get her hands on her first set of turntable. It was that moment that she knew she wanted to be part of ‘the scene’.

n 2014, to bring herself more challenge and inspiration, DJ Meirlin decided to change her career base to Los Angeles, CA where many major music scenes and opportunities takes place. Being thrown into the fire, she continued to be constantly at work perfecting her craft and kept challenging herself into new things. The language barrier did not stop her, as she did various opening sets at many popular clubs in LA in the starting year. She replicated the appearance of the famous Vocaloid Diva Miku Hatsune, and performed at many Japanese culture related events, which lead to playing as special guest DJ at Hatsune Miku EXPO 2014’s official after party. It was after this point when she started getting gigs at big venues like Avalon, Belasco, Project LA,Heat OC and many more. Her musical career as a DJ has been a great success, but she did not settle just in front of turntables.  After receiving several offers, she produced music for several fashion show events, and became a fashion model herself.

The multi-talented female DJ’s career goes on, living her “American Dream” making the impossible “possible”. Suffice to say, the electronic music scene should be expecting more things from DJ Meirlin in the upcoming years.