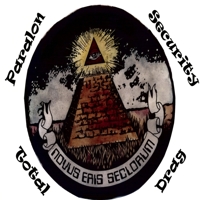 The Paralon Security is an original punkish power-pop Minneapolis band who originally played intensely and often at the 7th Entry, First Avenue Mainstage and many other local venues in the mid 1980’s. Their 1986 single release of Trip Around the World and Succession to the Throne was favorably reviewed and received a good bit of college radio play here and abroad, enjoying an enthusiastic following in Eastern Europe. Paralon Security is back with original front man/bassist Michael Morley aka Mad Max Rand and keyboardist Scott McInroy. On drums is the fabulous Tommy Duda, veteran of many great Minneapolis bands and artistic projects. On guitar is the legendary Earl E Mammal.

Paralon Security’s players have been rooted in the DIY music community from the beginning. Michael Morley and the elusive Leo M Whitebird started the Minneapolis label Channel 83 records in the 1980’s and that label went on the release records by such local favorites as Morticia, the Early Mammals, 2 Minutes 50, Soylent Green, Disturbed, and Impaler just to name a few. Earl E Mammal is a veteran of many groundbreaking local bands including 1994 Minnesota Music Award-winning Ghost Dance Deluxe and a frequent contributor to studio projects over the years… Paralon Security is back with a punkish/psychedelic power-pop sound and non-trivial lyrics written with echos of the psychedelic grandeur of the past, as well as incisive and sometimes acerbic social commentary in the spirit of the Stooges, MC5 and the other original garage rock heros. Kick out the Jams and book this band for something new and different!