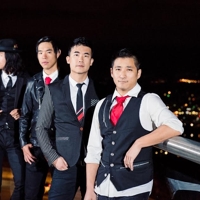 ortland’s The Slants are the first and only all-Asian American dance rock band in the world. They offer up catchy dance beats, strong hooks, and a bombastic live show that is “not to be missed” (The Westword). The Willamette Week says “While the band may well be best experienced live, Slants releases always promise a few blistering, note-perfect singles.” The music is the perfect combination of 80’s driven synth pop with hard-hitting indie, floor-filling beats which fans affectionately dub as “Chinatown Dance Rock.”

In addition to the music, the band is actively involved with helping marginalized communities, leading discussions on race and identity, and raising awareness of social justice issues.