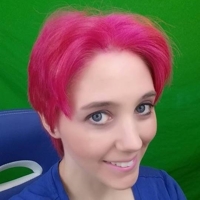 A fan of video games and animation, MarzGurl finally became a self-proclaimed anime fan in 2004 and began attending anime conventions in the state of Texas. With the help of Shaun Chiaffa in mid-2004, the first “MarzGurl Productions” video from A-Kon in Dallas, Texas was shot and produced. It was the dream of Chiaffa and MarzGurl to make documentary-styled convention videos, although the projects did not quite end up going in that direction. By early 2006, Shaun Chiaffa had disappeared, leaving MarzGurl to produce videos on her own. She continues to search for Chiaffa to this day.