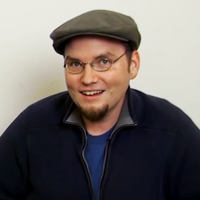 From Santa Christ to the Executor in To Boldly Flee, Rob Walker always plays a big role in the creation of the show Nostalgia Critic. He co-writes each episode, plays several hilarious characters, and also co-hosts the blog series Sibling Rivalry with his brother Doug. Always having a quick comeback (except when he doesn’t), he’s there to entertain.