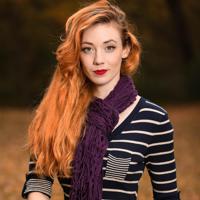 Whitney Rodgers is a Voice Actress, model and singer best known for her roles as “Meiko Shiraki” in Prison School and “Yozora” from Haganai and Hagani NEXT! . Whitney has just recently been announced as “Lotta Hart” in FUNimations “Ace Attorney” and has played many other characters including: “Margaret” in One Piece, “Artemis” from Maria the Virgin Witch, “Amelia Evans” in Freezing Vibration, and more. Whitney has also lent her voice to SMITE for the playable characters of “Ordo Solarus Amaterasu” and “Leona Genesis Jet Pack Fighter.” When she is not actively recording voice-overs, Whitney enjoys: going to the gym, drinking gallons of coffee, watching cutthroat kitchen, playing Tetris Attack, and giving her cat Chihiro too much attention. You can follow her on Instagram: Whitney_Rodgers_Model or on Facebook: Whitney Rodgers Voice Actress.