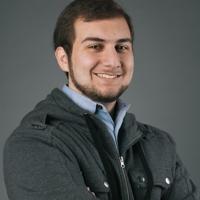 Alejandro Saab is a Voice Actor and Youtube Influencer! As an influencer he has over 395,000+ subscribers on YouTube with over 140 million+ combined views! But his true passion is acting! Alejandro has found much success as a voice actor, having been cast in many projects such as Junichi Hashiba in My First Girlfriend is a Gal, Prince Leonhard in The Royal Tutor, Tamotsu Denkigai in Akiba’s Trip: The Animation, ​Uno in Nanbaka, Henry Marigold in the popular web series RWBY, Yusuke Igarashi in Kiss Him Not Me, Naomasa Tsukauchi in My Hero Academia, KaiKai in Anime-Gataris, Haruto in A Sister’s All you Need and more titles!