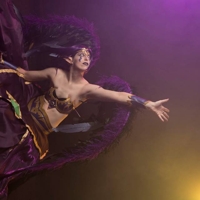 Kat, AKA Serenity’s Revenge Cosplay, is based on the east coast and has been part of the Cosplay community for 20 years. She has attended conventions from Boston to Florida. Kat enjoys Sci-fi and Anime, pulling most of her inspiration from these genres. Her Favorite Sci-Fi’s include “Star Wars” and “Firefly”, and her favorite Anime’s include “Sailor Moon”, “Her Lie in April” and “Ah! My Goddess”. She is also a avid Video Gamer and enjoys franchises such as “Final Fantasy” and “Dragon Age” and has plans for Cosplays from both series. In addition to her personal cosplay she is a member of the Mandalorian Mercs Costume Club and the 501st Legion, and is active with their Charity work and costumed events. Kat enjoys helping other cosplayers learn and improve their craft, and is particularly fond of group cosplays.