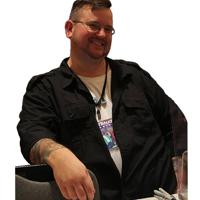 Jeff Balke is an entrepreneur, animator, voice actor, colorist and producer/director who created his own animation studio, Jeff Balke Studios, which focuses on 2D Animation (including CEL Animation). All of the characters and stories are created by Jeff himself. In addition to creating animations, his studio also produces Comic Strips which will be released in 2019. The Studios was founded in 2015 while Jeff was working as an Award Winning Comic Book Colorist and has worked on more than 300 comic books, and has worked with companies such as Marvel, Image, Zenescope, and Storm King Productions just to name a few. Jeff has also been nominated twice for the Eagle Awards for Best Comic Book Colorist, and won the Shel Dorf Award in 2011 for Colorist of the Year. In 2007 he created Sketch ColoringTM (HIS version of commissions). Sketch Coloring is when Jeff colors (with markers by hand) most anything black and white (comic, print, poster etc.) making what’s colored POP right off that image and leaving some of that item black and white, which makes it one of a kind and unique.