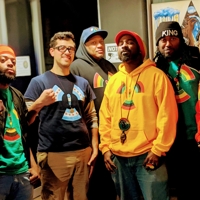 The Microphone Misfitz use the pillars of Hip-Hop and their shared dynamics to enlighten and sustain their audiences. Kin Solo, DFEX, and Jet Nam (Jet9) are the choreography & movement artists; Ray of Light is the high-octane hype-man & MC; Mel L. is the Graff artist, vocalist, & road DJ, and D-Nick The Microphone Misfit is the lead MC, lyricist & artistic director of the group. In 2018 the group made history by being the first Hip-Hop group from the USA to officially perform in China since the country banned Hip-Hop. The group was met with great praise and hundreds of fans. • The Fitz have performed at many festivals and conventions such as, 2X2 Hip-Hop Fest, SLUM Fest, SXSW, Wizard World Comic Con, Keystone Comic Con, J1 Gamer Con, MECCA Con, & Pocket Con. Each of the group’s albums come inside of a full-length comic book written by the group’s front-man D-Nick.