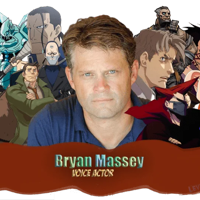 As a multi-award winning actor behind the mic, on camera, or on the stage- Bryan Massey has had the pleasure of working in a variety of mediums in the entertainment industry. The Texas based actor has performed as a nationally ranked cheerleader, a knight at Mideival Times, as well as a stuntman in numerous film & television.

In the animated world, he voices roles such as Crimson Riot in My Hero Academia, Oolong in Dragon Ball Z Kai & Dragon Ball Super, Ladd Russo in Baccano!, Zonge in Toriko, Shark in My Bride Is A Mermaid, Notorious in Ninja Slayer, Jacob Lessio from Fairy Tail, Monkey Dragon in One Piece, Issac McDougal in Full Metal Alchemist: Brotherhood, Cocytus in Overlord, Rades from Black Clover, Dick Gumshoe in Ace Attorney, Jerry from D. Gray Man, Dolph from Space Dandy, Bill in Shin Chan, and many others.

As far as video games go, you’d recognize his voice as Wilhelm the Enforcer a playable character in the Borderlands The Pre Sequel. He has also lent his vocal talents in Dragon Ball Z: Kakarot, Borderlands 2, Rage, Dragon Ball: Xenoverse 1 & 2, Aliens: Colonial Marines, Dragon Ball Z: Battle of Z to name a handful more. His voice makes sure to get its marathon training during his award winning satirical cartoon in his animated series www.VOtheShow.com.

As far as on camera is concerned you have probably seen Bryan’s face on your television working in hundred’s of commercials. Bryan is also well known for acting in such international films such as Oliver Stone’s biopic “W.,”“Mad Money,” “Year One” as well as in 3-D alongside Nicolas Cage in the grind house classic “Drive Angry.” On the small screen Bryan has worked on “X-Files,” “Prison Break,” “Chase,” & season finale of “Dallas” too name a few.