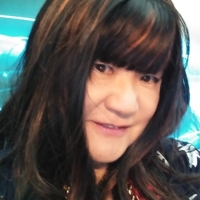 ”JAPANNA” Anna Ito じゃぱあんな杏奈愛都 is a first-generation immigrant from the far east Asia.  She was born and raised in Japan, dedicated herself to studying Japanese culture, history, and art.  In order to broaden her outlook, she traveled around the world, learned various cultures, and met people who had different religion, language, and skin color. She found out that open-mindedness to accept the differences is the key to peaceful world with no bullying, no discrimination, and no violence.

JAPANNA Anna Ito immigrated to America legally, worked hard, passed the US citizenship test, and become an American citizen. She is proud of where she came from and where she is now. She speaks English proudly with Japanese accent. You may not like thick foreign accent. She does not ask you to like it, but she is hoping you will kindly accept different language, accent, and culture. JAPANNA anna ito is a Japanese culture expert, brush calligraphy artist, master of modern-zen, storyteller, and founder of Japan Shinzen art & culture / UI international. Her mission is to help people reduce frustration and anxiety, and create peace and energy in the soul through her joyful CREATIVE-ZEN art & meditation SOUL-ENRICHMENT program.