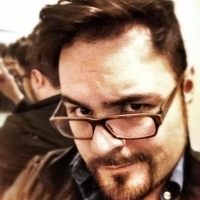 Gabo is a COMIX GORILLA and COLORIST SHOGUN. He draws comics in a cold damp dungeon located directly under Fermilab in Batavia, IL. His comics include Charley Loves Robots, which can be seen in several issues of Elephantmen, published by Image Comics, Jesus Christ: In the name of the Gun, and Albert the Alien. He has also been part of the Harvey award nominated anthology Reading With Pictures. He is an Eisner and Harvey Award winning colorist. His color art can be seen in several issues of Will Eisner’s The Spirit and All-Star Western, published by DC Comics. He is the creator of comic battling site Entervoid.com, and co-founder of independent comic publisher Pulpo Press.