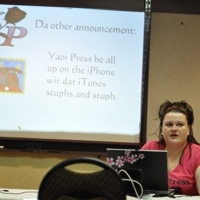 Yamila Abraham founded Yaoi Press in 2004, which has published dozens of boy-love graphic novels, books, comics, and art books. She is also a writer with over a dozen graphic novels in print under four different publishers. If you like English Yaoi, then you might already be a fan of works she has published.

You can occasionally find Yamila attending conventions that focus on Yaoi or have a significant Yaoi track as part of their anime offerings.