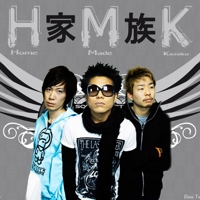 The group’s May 2004 debut from Ki/oon Records /Sony Music Entertainment Japan Inc. won acclaim as the best upcoming artist of the year on the Japanese music scene. Mico is widely referred to as a “soul rapper” because of his husky, powerful voice. Kuro adds a deep, whispering rap which gives life to the lyrics. Combined with U-Ichi’s DJ skills, their positive, heartwarming music has caught many listeners’ ears.