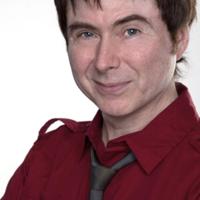 Quinton Flynn has done numerous anime and video game voices. Some of his most prominent voice roles include Reno, Axel, Raiden, and Doctor Riddles. Quinton’s voice has been burning up film and television since he first arrived in Los Angeles from his native Cleveland. He is an A-list voice actor, having played such famous animated characters as Jonny Quest, Spiderman, Speed Racer, The Human Torch, Timon, Snowbell in Stuart Little, just to name a few. His television and film appearances include Teenage Mutant Ninja Turtles, King of Queens, Animaniacs, Woody Woodpecker, Robot Chicken, and many more.

His best known roles in video game franchises have been his work providing the english voices of Raiden in the Metal Gear Solid series, Axel in Kingdom Hearts II, and Reno in Final Fantasy VII: Advent Children the motion picture. If you’re hip to the anime scene you’ll know him as Iruka-sensei and Deidara in Naruto and Naruto Shippuden, Marcus Damon in Digimon Data Squad, and Carl in Blood+, to name a few.