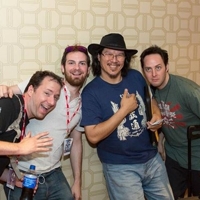 Steve Bennett is a manga artist and former leader of Studio Ironcat, although Studio Ironcat (by then under a different name) had closed by 2006. Steve has attended numerous anime conventions around the world.

Studio Ironcat was a small publishing company based in Virginia, dedicated to publishing manga. The company is most famous for publishing Megatokyo, a prominent webcomic, as well as the flamboyant style of one of its founders, Steve Bennett.

The company, commonly referred to as “Ironcat”, had published under the Studio Ironcat, I.C. Entertainment and Fuzzy Kitten imprints. They also had an adult oriented offshoot, Sexy Fruit. Over the course of its lifespan, Studio Ironcat published over fifty titles.

Steve was born in Tokyo, Japan and grew up in cities around the world including some in Alaska, Germany, and Japan.