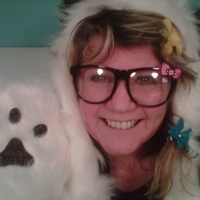 Tracey Moore has been voicing leading roles in award winning cartoon series since 1980. Kids growing up in the 80s and 90s would have heard her in many of their favorite series including George Shrinks ( George_ , Ned’s Newt( Ned) Legend of Redwall ( Warbeak), Care bears (Shreeky,Hugs, Share) My Little Pony ( Cheeralee) Peach ( Super Mario), Sam and Max ( the Geek) Flying Rhino Junior High( Marcus)and OF COURSE as the original voice of SERENA as SAILOR MOON in the beloved Anime series which she also cast ,voice directed and played a key role in development. Her direction has spanned many different genres from shows such as Highlander and Mythic Warriors to Magic School Bus and Bad Dog – the inaugural series for FOX Family. For ten years she acted as in house casting and director for Nelvana limited on numerous series. Moon Prism POWER!!!