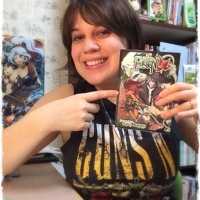 Brooke Stephenson, or Ogawa Burukku as she’s known by her pen name, is an American who for the last ten years has been working in Japan as a manga assistant, independent mangaka, illustrator, storyboard artist, and translator for manga and video games (and she has even done some voice work, including appearances in the Nintendo DS game Elite Beat Agents). In favor of more artistic freedom, Ogawa Burukku decided to try working independently, frequenting Japanese events such as Comic Market and Comitia with her original one-shots before beginning her weekly webcomic / webmanga series FaLLEN, an ongoing alternate magical girls series rated Teen+ and read by both men and women alike. The series started in the fall of 2012 and continues to be updated every week with graphic novels being released yearly as of 2015. You can read her comic at http://fallen-comic.com