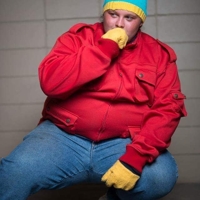 Arthur Stump is a cosplayer & comedian for Spectrum Entertainment from Franklin County Virginia. He is best known for cosplaying Eric Cartman at every single convention he goes to because he doesn’t know how to sew & apparently loves dehydration & heat exhaustion. He is also known for never breaking character because, “Hey, when your costume is a woman’s jacket, a hat you bought of Amazon & gloves you stole from a trailer at work, you’ve got to put SOME work into it.” Arthur has been a guest at several conventions & won multiple cosplay awards for his outstanding performance as a fat, angry little boy from a rural mountain town in Colorado.