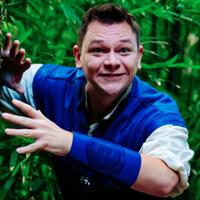 Xander Jeanneret is an actor, voice over artist, and reality personality living in Hollywood, CA. A fan favorite finalist on the popular TBS show, King of the Nerds (Season 2), Xander has also provided the voice of the “Announcer” on the hit indie fighting game Divekick and the voice of Zampa in the MMORPG Dragon Nest. Most recently, Xander has been traveling the US with his parody band The Library Bards, a collaboration with Bonnie Gordon (ABC’s The Quest, Street Fighter V). Fluent in Japanese, and a member of the LGBTQ Community, Xander brings his flair and unique perspective to events around the world. You can find him on Twitter at @Xanderrific and The Library Bards at www.librarybards.com!