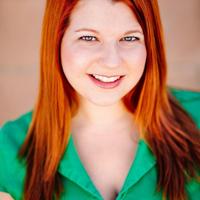 Although recently seen in many screen projects and web series, Bonnie is most recognized for her time on ABC’s inventively fun fantasy/reality show, The Quest. You can also see her on the new Star Trek Geek & Sundry Alpha show “Shield of Tomorrow!”
If her face doesn’t seem familiar to you, perhaps her voice will… From video games to anime, some of her voiceover credits include Street Fighter V (Rainbow Mika); Fire Emblem: Echoes (Silque and the vocalist for the end credits song); recurring characters on Cartoon Network’s Mighty Magiswords; Battlestar Galactica: Deadlock; Ikki Tousen (Soujin); Akiba’s Trip; Guided Fate Paradox (Frunetti/Misery); Demon Gaze for PSVita (Comit/Chronos/Pluto), and many more soon to be announced! Her future plans include living off of cheese plates and world domination.
You can find her on Twitter and IG at @BonnieBellG Library Bards – @librarybards