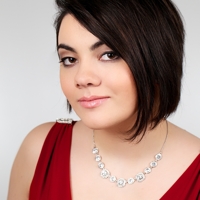 “Marissa Lenti is a voice actress who you can hear in anime roles like Cocotte in Dragon Ball Super, Libra in Fairy Tail, Gray Wolf in Kemono Friends, Momoko Hyakushiki & Kuu in NANBAKA, Chiaki Hoshinomori in Gamers!, Mistress Sadie in One Piece, Ilse Langnar in Attack on Titan: Junior High, Saeko Nogami in City Hunter: Shinjuku Private Eyes, and Alicia Florence in Aria the Animation, among others! She’s also appeared in many video games, like as the playable character Moze in the newly released Borderlands 3, as well as Brawl Stars, SMITE, Yandere Simulator, Huniepop 2, A Hat In Time, My Tamagotchi Forever, and more.

When she’s not acting, she’s casting & directing for Sound Cadence Studios, with some of her recent projects being directing the English dubs of the anime Kemono Friends, B’t X, This Boy Is A Professional Wizard, and This Boy Suffers From Crystallization, as well as casting for Rooster Teeth’s RWBY, gen:LOCK, Red vs Blue, Nomad of Nowhere, and Camp Camp. She’s also an ADR Writer, providing the scripts for Kemono Friends, Bloom Into You, Tada Never Falls In Love, City Hunter: Shinjuku Private Eyes, and Love Stage!!! to name a few. To learn more about Marissa, check out her website at www.MarissaLenti.com or follow her on Twitter or Instagram (@MarissaLenti)!”