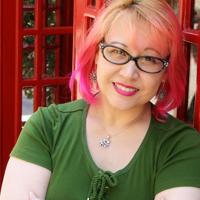 Tavisha Wolfgarth-Simons is a Japanese and German American artist who has spent nearly three decades drawing and publishing manga-influenced comics. Tavisha’s comics and illustrations have been published by Nickelodeon, Tokyopop, Digital Manga, Andrews McMeel Universal, and SLG Publishing, among many others. Original illustrated books and comics that she created with Rikki Simons include Ranklechick and his Three-Legged Cat, Super Information Hijinks: Reality Check!, ShutterBox, and The Trinkkits. @Tavicat, a comic strip about her cats, can be read at gocomics.com/tavicat.