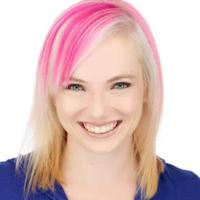 Kristen McGuire is a voice actor, script adapter and ADR director for Funimation. She is most well known for her voice acting work as Loop Nishigori in Yuri!! On ICE, Young Nora in RWBY, Rin Toyama in New Game, Hanabi Kawai in Keijo!!!!!!!!, and Hinano Kurahashi in Assassination Classroom. She has directed the English dubs for Gamers!, Citrus, and assistant directed for ElDLIVE and Tsukigakirei. Kristen has also served as the script adapter for many Funimation titles, including Love Live! Sunshine!!, Dagashi Kashi, Tsukigakirei, and the Vision of Escaflowne. She also enjoys making her own comics and has self published two of her own titles, a graphic novel called “Enchanted”, and a one shot comic called “A Day in the Life of a Cat Girl”. For more information about Kristen’s work you can visit www.kriscomics.com.