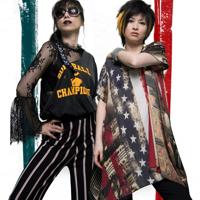 Zwei is a Japanese duo band which is composed of Megu (Ba.) and Ayumu (Vo.). They met in 2002 and felt connected through their music. Consequently, they formed Zwei in 2003 and made their major debut with the song “Movie Star” in 2004. Zwei is a German word that means “two”, it’s a symbolization of the unity of their two-different musical styles.

Zwei can convey a variety of feelings through their unique style. They have received invitations to appear throughout the world. Zwei appeared four times on “Animelo Summer Live”, which is the largest annual anime music festival in Japan. Also, they appear on many anime event, such as Netherland’s “ABUNAI”, Malaysia’s “ANIMANGAKI”, Korea’s “MU:CON SEOUL” in 2014, 2015 ,2016 respectively. In 2018, they appear on America’s “Anime Matsuri”, and Philippine’s “Cosplay Mania”. Furthermore, they have been appearing on Germany’s “AnimagiC” since 2013 annually.

They joined to 5pb. Records and released their song “Mephistopheles no Mokushi” (メフィストフェレスの黙示) in 2009. In 2012, they released the theme songs of the novel game and TV anime ROBOTICS;NOTES , called “Kakucho Place”(拡張プレイス) and “Junjou Spectra” (純情スペクトラ). In 2014, Zwei released a collaborative single “Brave the Sky” with Ito Kanako. Also, they released their mini album “Ley Line” which Integrates loud rock style and quality melody in a great balance in June 2017. In 2018, they released “LAST GAME” which is the ending theme song of TV anime Steins;Gate 0 in April, and “Avant Story” which is theme song of novel game ROBOTICS;NOTES DaSH in December.