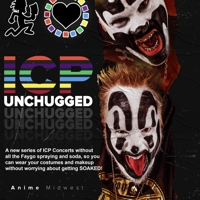 The Dark Carnival rises and the dead are judged. Learn the story through the Joker’s Cards before the end consumes us all. The Insane Clown Posse is a hip hop group like no other. With supernatural and horror-themed lyrics, ICP music is like none other. Founded in Detroit in 1989, Insane Clown Posse performs a style of hardcore hip hop known as horrorcore and is known for its elaborate live performances. The duo of Violent J and Shaggy 2 Dope has earned two platinum and five gold albums. According to Nielsen SoundScan, the entire catalog of the group has sold 6.5 million units in the United States and Canada as of April 2007.