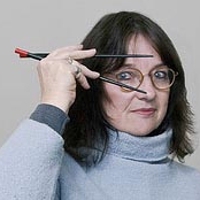 Frenchy Lunning, Ph.D. is a Professor of Liberal Arts at the Minneapolis College of Art and Design, there she has focused on design, popular culture and cultural theory throughout her work. She has written magazine, journal articles, and book chapters and is currently working on two books, one on fetish and fashion, and the other on cosplay for Berg Publishers in Britain. She is also working on a book she began on a Fulbright to Japan in 2008 on the shôjo as a global character. She is the director of SGMS: Schoolgirls and Mobilesuits: Culture and Creation in Manga and Anime, an annual workshop at the Minneapolis College of Art and Design which will inaugurate the first annual Mechademia Conference, the only academic conference currently in the US focusing on Asian popular culture (http://schoolgirlsandmobilesuits.com/). She is the co-founder and Editor-in-Chief of Mechademia, a book series published by the University of Minnesota dedicated to Asian popular culture, but primarily on manga and anime. Mechademia 7: Lines of Sight, soon to be submitted, will appear in fall of 2012, Mechademia 6: User Enhanced, will be out his fall of 2011(http://www.mechademia.org/). She has a new film production business with some colleagues called Moving Walkway Productions, which although now works primarily on music videos, has a script for an adult animation feature which they hope will eventually be produced. Despite her academic work, she is also an otaku, and is lucky enough to be able to speak at universities around the country on the things she loves.