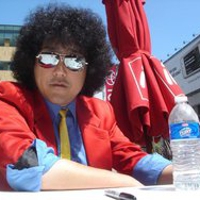 Shinichi Watanabe, or more popularly “Nabeshin,” is known to anime fans as a larger-than-life, iconic figure with an outrageous sense of humor. He directed the comedy anime series Excel Saga, Nerima Daikon Brothers, and Puni Puni Poemy, which feature frenetic pacing and appearances by his animated alter ego, a mysterious, recurring character with an afro and distinctive outfit who is tangential to the story. Nabeshin has also served as series director for The Wallflower and Tenchi Muyo! GXP, and he can be found in these series as well, in cameo or supporting roles.

Nabeshin has been quoted as saying that he places great importance in making viewers laugh. Stating that he values laughter as much as tears, his preference is to motivate viewers to have fun and enjoy a show. He reasons that his success stems from provoking the same, strong emotional investment in a humorous way as a traditional, sentimental story does.

Nabeshin has also written lyrics for the opening songs of Excel Saga and Tenchi Muyo! GXP, and has served as storyboarder and episode director for a variety of other anime series.