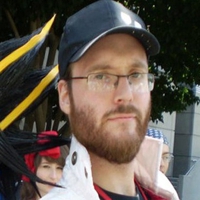 LittleKuriboh (AKA Martin Billany) is the creator of Yu-Gi-Oh!: The Abridged series and the godfather of the abridged age. He has thus far produced no less than 52 episodes, a spinoff, a prequel, a christmas special and two movies, creating a cultural phenomenon in the anime world. In addition to playing nearly every character in his own series, he has made cameos in the Death Note, Naruto, Sonic X, Trinity Blood, Pokemon, Fullmetal Alchemist and Sailor Moon abridged series. With a mission to revitalize interest in the Yu-Gi-Oh franchise and make it more accessible to Joe Public, LittleKuriboh will continue the original abridged series providing us with priceless entertainment for many years to come. All-round nice guy and community fan-favourite, he is also associated with TeamFourStar (the group behind Dragon Ball Z Abridged, for which he also supplies voices) and has made guest appearances on comic-book video review series Atop the Fourth Wall.