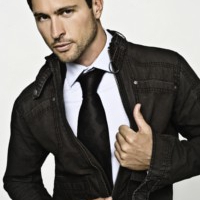 Jason Faunt was born outside of Chicago, IL. After years of playing college and then a brief stint in pro baseball he hung up the cleats and decided to move out to L.A. to pursue a longtime dream of becoming an actor. Initially having some success on the commercial and print side Jason started doing bit work on soap operas which led to his role of ‘Kane’ on Port Charles and ‘Carson’ on Passions. Soon after he booked the lead as the Red Ranger on Power Rangers Time Force, playing two different characters, one from both the present and the future.

Since Power Rangers Jason has had continued success on both the commercial and print side; along with co-Producing and starring in his own film that appeared and received festival acclaim in several national festivals. The film is entitled ‘Pact’.

The past year Jason has been working in the motion capture world as the Leon S. Kennedy, lead character in Resident Evil 6. Jason resides in Newport Coast, CA with his wife Stephanie and two daughters Keira and Makayla. Ages 6 and 4.