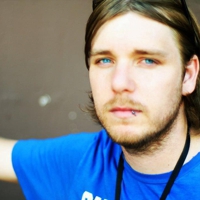 Mitchel A. Jones Pictures
This entry or version has yet to be approved by our editors.

Mitchel A. Jones was born in October of 1984 in Bryan, Ohio. Creatively inspired by the German Expressionistic mind of Tim Burton, Mitchel began spinning short stories of his own and developing stop motion animation films on an old VHS camcorder, and with that his love for the process of film was discovered. His teen years focused his writing efforts into horror screenplays. After high school Mitchel majored in film at the University of Toledo. He branched out on his own to shoot his first short film project with another student entitled The Pilfer. The short was well received and unique for it’s time. Having spent a decent amount thus far, Mitchel felt it only wise to put his camera to work for him and began shooting for the country/southern rock group Sierra Shame. Months of bar scenes and line dancing had earned him cash but not much for film experience so when he was offered the opportunity to work with the History channel on a Halloween special for the show Modern Marvels he was more then ecstatic. Now bitten by the production bug he took this as inspiration to start his own production company Chasing Autumn Films, LLC with fellow friend and song writer Dallas McFarland and is currently developing a slate of horror films with partner company TRIWAR Pictures, LLC that he will be producing and directing.