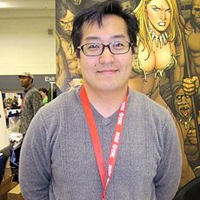 Frank Cho, who is best known for his creator-owned comic strip, Liberty Meadows, is the writer and artist working on the Marvel NOW title, Savage Wolverine. Throughout the early 2000s, while working on Liberty Meadows, he also provided cover art for Marvel, Image, and Dark Horse Comics working on such titles as Ultimate Spider-Man, Invincible, and Hellboy: Weird Tales. He was nominated for 3 Harvey Awards in 2006 (Best Artist, Best Cartoonist, and Best Cover Artist). He likes drawing monkeys.