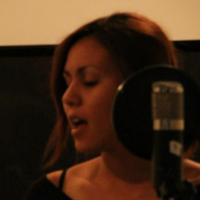 Olivia Olson is known for playing Marceline the Vampire Queen in Adventure Time, Vanessa Doofenshmirtz in Phineas and Ferb, and for her role as Joanna singing “All I Want For Christmas Is You” in Love Actually. Olivia was adopted at birth and raised in Los Angeles, California, and currently lives with her mother, brother, and her father, who is a comedy writer. She has appeared as a singer and actress on television shows and in live theatre, including Comedy Central Stage, the HBO Theater, and The Fake Gallery. Olson has also appeared on The Tracy Morgan Show and guest starred on The Ellen DeGeneres Show singing with DeGeneres, actor Jack Black and Broadway star Kristin Chenoweth.