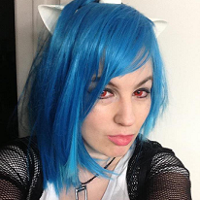 Kira Buckland began voice acting at the age of sixteen after having been introduced to the online voiceover community. She got her start voice acting in flash animations and games, and started getting noticed in the industry after winning Anime Expo 2007’s Voice Actor Idol.

After moving to Southern California from her hometown of Anchorage, Alaska, she soon landed her first anime roles as Kanae in “Five Centimeters Per Second”, Eri in “AIka R-16” and Nimka in “Moribito”, and began voice acting in video games such as Castle Crashers, Luminous Arc 2, and Dynasty Warriors 6: Empires. Her big break came when she landed the role of the final boss Bloody Marie in “Skullgirls”. Most recently, she can be heard as Izumo Kamiki in “Blue Exorcist” and Madoka Kyouno in "LaGrange”. Recently, Kira was cast in the hit anime series Magi: The Labyrinth of Magic, as Ren Kougyoku!