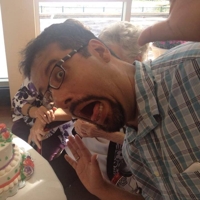 Robert DeJesus, wife of Emily DeJesus is an author, artist, and character designer who has drawn manga-style art for nearly two decades. He has worked for companies ranging from PlayStation Magazine to Marvel to Hasbro, among many others. Robert was born in Indiana and has been publishing manga-inspired artwork for around 20 years and has been published in countries around the globe, including doing work for Playstation Magazine and Marvel. Robert annually attends and does artwork for Ohayocon in Ohio every year.