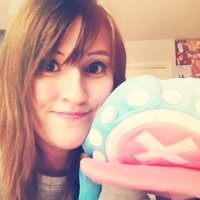 Juliet Simmons is a part time human being; part-time anime hound and shy, quiet college student—well, for the most part. She is an actress and vocalist, voicing at Sentai Filmworks while also recording covers as the popular YouTube singer & utaite, JubyPhonic. In just over 3 years at Sentai, she’s performed in near 40 shows. She appeared on national tv on Cartoon Network’s Toonami in Akame Ga Kill as Kurome and she recently played Chiyo Sakura in Monthly Girls’ Nozaki-kun to rave reviews. Chiyo was such a dream role and favorite character that she says she feels she can ‘now die happy’. Other favorite characters so far have been Midori Tokiwa from Tamako Market and Madoka Harumi from Dog & Scissors.

JubyPhonic is her singer persona and the name for her YouTube channel that has already around 300,000 fans & subscribers. Reaching close to 100 million views now are her covers of VOCALOID, anime, and new works. As JubyPhonic, she has shared English covers of mostly Japanese VOCALOID recordings over the internet for about 4 years, since age 17. She writes translyrics, sings, records, mixes, subs, and at times makes artwork for her own English covers of favorite synthetic Japanese singers and bedroom composers aka VOCALOID. Her purpose is to make the uniquely evocative and story-telling computer songs accessible to a broader audience with quality English renditions. Countless anime dreams fulfilled later, she has arrived at a point in her life that would most likely bring three-year old Juliet to her knees in shock.