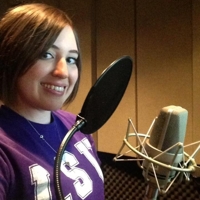 Megan Shipman is an anime lover who is excited to be here. Her breakout role in anime was Hibari from “Senran Kagura : Ninja Flash!”. Since then, she has gotten to voice some amazing characters like, Caimie in “One Piece”, Arisa Meigo in “A Certain Magical Index : The Miracle of Endymion”, Akane Hyakuya in “Seraph of the End : Vampire Reign”, Cassidy in “Dimension W”, Kochou Yoshida in “No-Rin”, Nene Nanakorobi in “Pandora in the Crimson Shell : Ghost Urn”, and Yuzuru Yamai in “Date A Live II”. You can hear more of her in “Kamisama Kiss”, “Attack on Titan : Junior High”, “Fairy Tail”, “Show by Rock!!”, “Snow White with the Red Hair”, and “Sky Wizards Academy”. When she isn’t voice acting, Megan is on Twitter (@18moptop) and Facebook (Megan Shipman – Voice Actor) talking to everyone about whatever new show she is watching at the time.