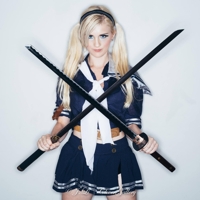 Snugzmeow began cosplaying and attending conventions in 2010 when she was 16. In early 2014, she began streaming World of Warcraft on Twitch.tv, where she was later partnered. Now, instead of streaming games on Twitch, she streams cosplay making tutorials full time as a creative broadcaster. Snugz specializes in using hot-glue wherever possible, and teaching lazy people how to craft. If you stop by her stream you are likely to hear K-pop and meet her co-host, a Ragdoll cat named Ser Pounce! An occasional cosplayer himself, Ser Pounce loves to help Snugz craft and join in her photo shoots!